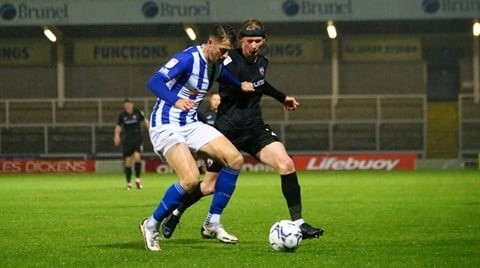 19 year old Freddie Price continued his development with a starting place for Morecambe’s line up in the Papa John’s Trophy. The young forward gave another impressive display in the 2-2 draw with Hartlepool United. Also given an opportunity was full-back Tylor Golden who’s Salford City suffered a narrow 2-0 defeat against Tranmere Rovers.

Goalkeeper Joe Hilton kept a clean sheet for Hamilton Academical during their 2-0 win against Aberdeen B in the SPFL Trust Trophy.

Bethany England struck a vital UEFA Women’s Champions League goal for Chelsea in their Group A game with Vfl Wolsburg. The Londoners fought back from 3-1 behind to claim a 3-3 draw at Kingsmeadow.

Socceroo’s Martin Boyle and Harry Souttar were part of the Australia side that created World Cup history. They became the first side to win eleven consecutive qualifying matches in the same campaign by beating Oman 3-1. To cap off the achievement Martin Boyle carried his blistering domestic form onto the international stage by scoring the second goal.

Marine are on course for another famous cup run, this time in the Buildbase FA Trophy. Josh Solomon-Davies grabbed a crucial late equaliser against 1874 Northwich. A final score of 1-1 led to extra time and penaties with the Crosby outfit winning 4-1 on spot-kicks.

Kit Graham pulled a goal back against Brighton & Hove Albion in the WSL, but ultimately her Tottenham Hotspur side lost 2-1 in a close match. #FullNinetyFamily